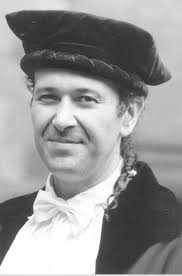 Dov Gabbay was born in 1945 and grew up in Israel. He did his university studies at Hebrew University, starting with Mathematics and Physics before focusing on Mathematics and Logic later on. His master thesis on many-valued logics was followed by a PhD on non-classical logics in 1969. In 1970 he moved to Stanford where he took over Dana Scott's position and profited from many opportunities to broaden his perspective, in particular he got interested in Logic and Language. In 1975 Dov went back to Israel where he became Lady Davis Professor of Logic at Bar-Ilan University. In 1982, while visiting Imperial College to work with Bob Kowalski on Logic Programming, he eventually discovered his love for Logic in Computer Science. It was thus a natural step to become Professor of Computing at Imperial College in 1983, where he stayed for 15 years.

He thought that a good way to learn about the relation between Logic and Computing or AI would be to team up with colleagues and produce Handbooks of Logic in Computer Science (Abramsky et al, 1992) and of Logic in AI (Gabbay et al. 1992), in the spirit of his older Handbooks of Philosophical Logic (Gabbay et al. 1983). This was the starting point of an epic collection of more than 50 handbooks in Logic, an impressive and valuable attempt to systematize and integrate Logic and all its often interdisciplinary subdomains.

In the 90s Dov pursued his central idea that there is not a single correct logic, but that there are as many logics as there are ways people reason in practice, culminating in his statement "I am a logic, each one of us is a logic". But to connect all the resulting formalisms one needs an overarching framework, a task he addressed by developing his theory of Labelled Deductive Systems. This was achieved in the context of a 5-year SERC sabbatical (1992-1997) spent among others at the University of Stuttgart and the Max-Planck Institute for Computer Science in Saarbrücken.

In 1998, Dov joined King's College in London as Professor of Computing, Professor of Philosophy, and Augustus De Morgan Professor of Logic, emeritus professor since 2011. Besides professorships at Bar Illan University and Ashkelon College in Israel, he was since 2008 visiting professor at the University of Luxembourg where he still collaborates with the Individual and Collective Reasoning group of Professor Leon van der Torre. One of his major scientific topics in this phase have been argumentation and fallacies, whose societal importance in the 21st century he continues to emphasize.

Dov has also been highly active on the organizational plan, being the founder and acting as the president of several international conferences and organizations linked to Logic, like FOLLI, the Association of Logic, Language and Information, or the Interest Group in Pure and Applied Logic, the International Federation of Computational Logic, and others. As another great service to the Logic community he has founded, together with Jane Spurr, College Publications, a non-profit academic publisher.

The broad range and tremendous importance of Dov Gabbay's contributions to the field of Logic make him an ideal name-giver for a prize supporting Logic and Foundations.

(This text has profited from the book "Logic, Language, and Reasoning - Essays in Honour of Dov Gabbay", edited by Reyle and Ohlbach, 1999.)